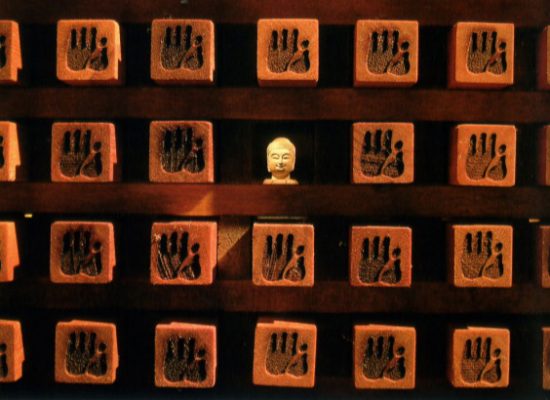 “Everyone faces the same Buddha.After drawing the blessing wood from where he wants, expects or is accustomed to, as well as in different ways he chooses, everyone can see the Buddha in his heart from his choice. ”

To celebrate New Year’s Eve. I was used to travelling, on the road or in the mind. “Seminar on Architecture Historical Theory” was one of my favourite open course. Teacher is Gong Shuzhang. As time passed, 2019 was getting closer, he talked about his own project.
In 2002, in order to commemorate the return of the Buddha statue to the Four Gates Pagoda that is a Sui dynasty (581-618 AD) stone Chinese pagoda in Shandong, a “roaming. gathering” exhibition was held at The National Sun Yat-sen Memorial Hall.The Buddha’s head is the only exhibit. Two walls had been set up, one in front of and one behind the Buddha’s head, one full and one empty.
On the wall in front of the Buddha’s head, a number of square holes were pre-opened, but these square holes have been filled with tens of thousands of blessing wood. The blessing wood are actually small wooden tubes, one end is carved the Buddha’s hand, and the other end is a hole, everyone who visits can roll up the praying strips that they have written into small wooden tubes. People can remove the blessing wood from the wall at any position. Then through the square hole that the blessing wood took down on the wall, he would look at the Buddha’s head for a moment. When this intimate conversation ends, people can bypass the wall and come to the front of the Buddha head to worship.
At the end of the worship, people can put the blessing wood into the wall behind the Buddha’s head, and the blessing wood can’t be taken out once it is put in. There was only an empty box at the beginning of the wall behind the Buddha’s head, but as the number of worshippers slowly increased, the wall became more and more full, and the wall in front of the Buddha’s head became more and more empty. With the change between the virtual and the real, everyone’s small care will slowly gather into this wishing wall, and the last this wall is composed of 6 boards, when the exhibition is over. It can be combined into a box to wrap the Buddha’s head and transport it back to the Four Gates Pagoda in Shandong.
Seeing this, I was touched by it, Cheng, Qi, Zhuan, Jie, is like a narrative poem. The final expression is still to use the “space statement” to make people feel the sacred sense of ritual.
It is 2019 now, I don’t know if my choice in the New Year can make myself see the Buddha in my heart. But I still hope that I and everyone who can see this will be able to find the moment of being touched in the new year, no matter what choices are made.